** Wikipedia: A round-robin tournament (or all-play-all tournament) is a competition in which each contestant meets all other contestants in turn.

So you might think... how difficult could it be to code a round robin tournament generator? And I agree, for a simple case of N teams in which you want them to play once against each other, there are going to be N - 1 matches and... you get the drill, it really is not that hard. You can easily pick up this wikipedia article and I am sure you'll solve it in no time!

You'll soon see how this actually gets more complicated than anticipated.

This exercise was initially oriented towards a padel tennis doubles tournament. There are two modes:

So without further ado, let's solve the freakin brain-teaser!

After banging my head too many times against the wall trying to solve this exercise, I came across this awesome blog explaining how the cyclic solutions work. In the mentioned blog he solves the problem for the bridge card game which interestingly applies to our case!

In today's blog we will focus in the case of 4N players. More concretely, we will use as example an 8 player Round Robin Tournament.

First condition: each player is paired up once

Second condition: each player plays twice against each other player

To achieve this, players must be partnered in a very specific way or else it won't just work. Let's start with the basics. The tournament consists of

The players in this picture were randomly placed in one of the 8 different available positions - there are 2 courts with 4 positions per court. The key to solve this exercise is to learn in which position/location we have to place each player in each round.

How do we do this?

Take a look at the picture below: 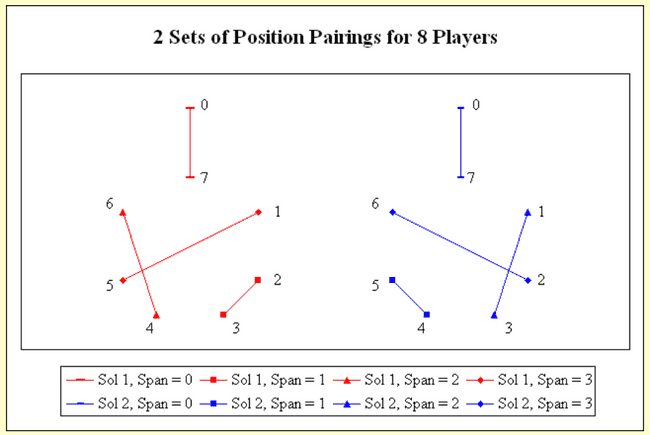 Other permutations from grouping the red pairs into 2s are also valid.

The blue figure provides a symmetrical solution. Both solutions are equally valid, and in fact, there is a third solution. As proposed in durangobill's post, see if you can find it ;)

In a more visual way, the courts then would look like this:

So if we had in a round:

And placed them in the following positions as we calculated before:

the resulting matches for the round are:

Which get us into the last step! How to calculate in what position/location each player has to play each round? This part is much easier and straightforward. If you checked out at the beginning the link for Round Robin Tournament, we will be using here the Circle's Method:

The resulting rotation can be seen in the following matrix:

The only thing left to do is place each player in their corresponding position in each round (as we did before) and we will obtain the entire schedule.

Here is an example of how if would look like for the first 4 rounds:

** doubles-tournament library coming soon to npm where you will be able to see the entire code, I know at the minute the code below looks quite confusing. I apologise for that. Instead of deleting this section I'll leave in case you want to use it but the important part of the post if the explanation of how Switch Partners Round Robin works.

This was my code solution to the previous steps. First I created a class to calculate the positions sequences. Simply call SequenceGenerator.calculate and it will automatically apply the correct method (for the case of 4N players or other).

To calculate the schedule we need the "tables", the I used the predefined tables for 8 players shown in the last picture. I simply hard-coded them as below:

The code to create the schedule is a bit long, nonetheless the method you are interested in is calculate. I believe by itself it should be understandable, but you can check the entire code in case you don't understand any of the helper methods.

* I have created classes for Match, Team, Players. I believe they are self explanatory so I will not really add their definitions so it doesn't make it more confusing.

I hope you enjoyed the post and if you want to go into more detail I highly encourage you to visit durangobills website. His explanation is way more detailed.

I am currently working on a library to be able to handle double tournaments which will include both round robin modes plus brackets single and double elimination soy stay tuned!

Written by Alberto Delgado who loves building cool stuff and learning one or two things in the process.

Subscribe to newsletter
I am running a newsletter with my blog updates. Subscribe so you don't miss them!